This type of chimney inspection may need inspection from the roof to spot, but damaged mortar joints between chimney masonry is an issue which requires immediate repair. Chimney Crack mortar joints that are failing can mean accelerated damage to the chimney increasing brick chimney repair cost & chimney crack repair cost,  exposing the bricks to greater amounts of moisture. This water gets into small cracks in the masonry, chimney bricks & mortar joints, they naturally undergo a freeze / thaw action which can turn into large cracks, if the problem isn’t addressed, the chimney stack could collapse in the worse case or at a minimum lumps of mortar and brick can dislodge during storm winds causing damage to your roof and people & property at ground level.  A chimney inspection from nationwide chimneys can spot the tell tail signs usually from the ground with the use of a zoom camera.

Signs of moisture in a chimney or fireplace are red flags that the chimney isn’t operating the way it should. Rust is one clue that there is too much moisture, and you may see rust in the firebox or on the damper. Fireplace inspection –  take a close look at the damper if it becomes difficult to operate or if it isn’t sealing properly. Moisture in the chimney which causes rusting can create numerous problems, including causing flue tiles to crack. A fireplace inspection will determine if the fireplace repair, fireplace brick repair, chimney crack repair or chimney liner repair is required. A cracked or deteriorated flue lining is highly dangerous, and a leading cause of chimney fires and house fires allowing heat and gases to penetrate into high risk areas. Early chimney inspection and fireplace inspection can prevent these dangers while keeping chimney crack repair cost, firebox repair cost & chimney repair cost estimate affordable before extensive damage occurs. 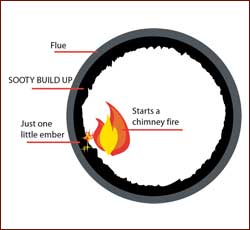 Spalling occurs when water penetrates brick, natural stone, or concrete and forces the surface of the masonry to pop out, peel off, or flake off. Sometimes salt also pushes outward from the inside and causes spalling (brick salts). To spot spalling, look for bits of masonry falling from the chimney. Spalling brick repair & spalling brick repair  cost is an early preventative brick chimney repair measure that will stop the destruction of the brick chimney structure.

Thin slices of chimney tile can begin to pile up at the bottom of the chimney, if the liner is damaged.The flue lining of a chimney must be intact in order to safely use a fireplace.  if not resolved, could result in a house fire.
While shaling flue tiles can become evident, identifying cracked flue liners requires an inspection by a professional using a special CCTV chimney inspection camera.

Wallpaper if damaged in areas near the chimney (walls surrounding the chimney stack), could be because of excess moisture in the chimney brick work behind the wallpaper covering. Whether the moisture problem is caused by the tell tale brick chimney defects I have covered in this post a regular chimney cleaning professional should alert you to problems that warrant further investigation.

Chimney inspection & Fireplace inspections are frequently overlooked by homeowners and if not given the priority attention they deserve you may find a nightmare scenario of a chimney or house fire that your insurance doesn’t cover through lack of regular maintenance on your part. Remember you are lighting a fire inside the brick stack of your house and assuming the chimney flue will always do its job!  If you have even the slightest concern , it should be repaired without delay. – Take action today and call Nationwide Chimneys for free chimney advice, fireplace inspections, chimney inspections & a no obligation chimney repair cost estimate – We even can manage chimney repair claims through your insurance company with our team of expert Loss Assessors & Claims management professionals.